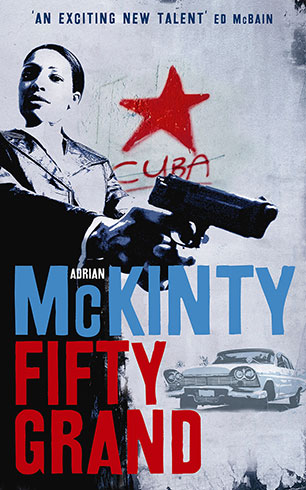 Cuban heat meets immigrant politics in this thriller with a social conscience.

Cuban cop Hernandez has a score to settle, on behalf of a deadbeat dad, a 'traitor' who skipped free from Castro's control to set up a new life working illegally in Colorado. He settled in a ski resort popular with the Hollywood set, where the facade is maintained by the immigrant cleaners and labourers who work for below minimum wage while the local sheriff is bribed to turn a blind eye. Hernandez Sr's dreams of fortune and freedom came to a swift end when he was killed in a hit-and-run accident.

Sworn to avenge his death, Hernandez has some obstacles to overcome - not least getting out of Cuba, where visas are as elusive as constant electricity.

Seguing back and forth between heat-soaked Havana and the icy luxury of the mountainside resort, Fifty Grand is an audacious thriller from an acknowledged talent - and an incendiary debut for a new hero.

Adrian McKinty was born and grew up in Carrickfergus, Northern Ireland at the height of the Troubles. He studied politics at Oxford University and after a failed legal career he moved to the US in the early 1990s. He found work as a security guard, postman, construction worker, barman, rugby coach and bookstore clerk before becoming a school teacher. He is the author of The Dead Trilogy. He now lives in Melbourne, Australia.