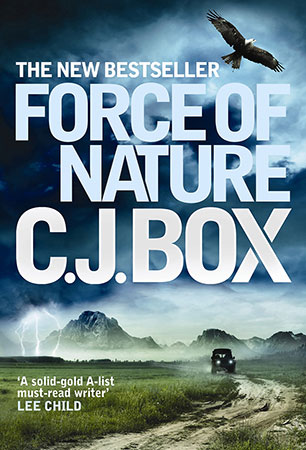 The 12th in the bestselling, award-winning, solid-gold Joe Pickett crime series. In Force of Nature, game-warden Joe Pickett faces his most difficult decision yet. Outlaw falconer Nate Romanowski is in danger and Joe must make a choice: help his friend, or enforce the law?

Joe Pickett's outlaw falconer companion, Nate Romanowski, faces the battle of his life and one he may very likely lose. His mysterious past comes back in the form of his former special forces colleague, an utterly ruthless soldier/homeland security official who knows his rise through the military and intelligence community will be derailed if Nate ever tells what he knows about their time together in Afghanistan in 1995. After years of dispatching fellow special forces team members to take him out, Nate's nemesis decides the time has come to end the threat to him once and for all. And he does it by incorporating many of the same tactics that served their unique and secret unit well in the Middle East: by recruiting locals. Nate can trust no one except Joe Pickett, who is constrained by his oath and duty to the law and the state. But Nate must involve Joe because he knows his enemy will strike at his friends in order to draw him out and the entire Pickett family will be a target. Because of Nate's fugitive status he can only fight back outside the law, and Joe must make a choice: help his friend or adhere to his principles?
More books by this author More books in this series

C. J. Box is the winner of the Anthony Award, the Prix Calibre .38 (France), the Macavity Award, the Gumshoe Award, the Barry Award, the Edgar Award and an L.A. Times Book Prize finalist. He has even been nominated for the IMPAC prize. His novels are US bestsellers and have been translated into 21 languages. Box lives with his family outside of Cheyenne, Wyoming.