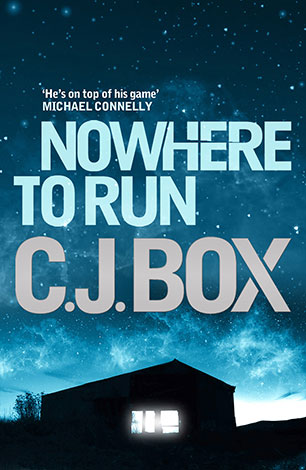 'I love Joe Pickett and with Nowhere to Run, he's on top of his game.' Michael Connelly.

Joe Pickett's in his last week as the temporary game warden in the town of Baggs, Wyoming, but there have been strange things going on in the mountains, and his conscience won't let him leave without checking them out: reports of camps looted, tents slashed, elk butchered. And then there's the runner who simply vanished one day. Joe doesn't mind admitting that the farther he rides, the more he wishes he could just turn around and go home.

And he is right to be concerned. Because what awaits him is like nothing he's ever dealt with, like something out of an old story, except this is all too real and too deadly.

When he'd first saddled up, he'd thought of this as his last patrol. What he hadn't known was just how accurate that thought might turn out to be.
More books by this author More books in this series

C.J. Box is the winner of the Anthony Award, Prix Calibre 38 (France), the Macavity Award, the Gumshoe Award, the Barry Award and the Edgar Award and is also an L.A. Times Book Prize finalist. His novels are US bestsellers and have been translated into 21 languages. Box lives with his family outside of Cheyenne, Wyoming. Visit his website at www.cjbox.net.