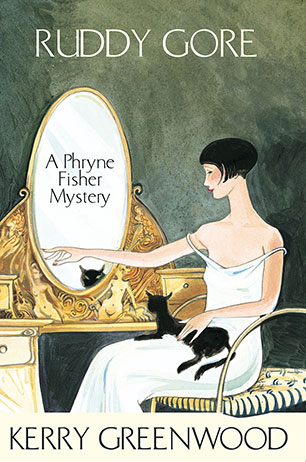 Put the delectable Phryne Fisher and one of the more preposterous Gilbert + Sullivan shows on stage together the result is another fantastic read of 1920s life, crime and dresses.

The glorious Phryne Fisher returns to the spotlight in her seventh adventure.

Running late to the Hinkler gala performance of Gilbert and Sullivan's Ruddigore, Phryne Fisher meets some thugs in dark alley and handles them convincingly before they can ruin her silver dress. Phryne then finds that she has rescued a gorgeous Chinese, Lin Chung, and his grandmother, and is briefly mistaken for a deity.

Denying divinity but accepting cognac, she later continues safely to the theatre. But it's an unexpected evening as her night is again interrupted by a most bizarre death onstage.

What links can Phryne possibly find between the ridiculously entertaining plot of Ruddigore, the Chinese community of Little Bourke St or the actors treading the boards of His Majesty's Theatre?

Drawn backstage and onstage, Phryne must solve an old murder and find a new murderer - and, of course, banish the theatre's ghost, who seems likely to kill again.
More books by this author More books in this series

Kerry Greenwood is the author of twenty-seven novels and the editor of two collections. Previous novels in the Phryne Fisher series are Cocaine Blues, Flying too High, Murder on the Ballarat Train, Death at Victoria Dock, The Green Mill Murder, Blood and Circuses, Urn Burial, Raisins and Almonds, Death Before Wicket, Away with the Fairies, Murder in Montparnasse and The Castlemaine Murders. She is also the author of several books for young adults and the Delphic Women series.