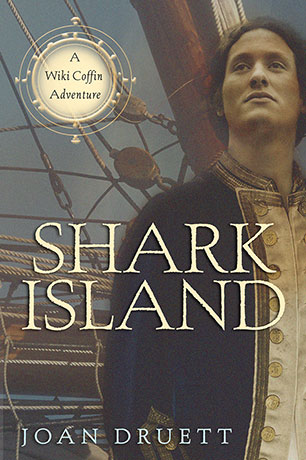 The second thrilling adventure in the Wiki Coffin series in which Forsythe leads Wiki and George into dangerous waters where both sharks and men kill.

Wiki Coffin, American-Maori linguist, sails aboard the US Exploring Expedition launched to put America at the forefront of nineteenth-century scientific discovery. His skills in Portuguese have him posted to Shark Island off the Brazilian coast to investigate a report of pirates. Intrigued, he sets out with Captain George Rochester and the despicable Lieutenant Forsythe to the uninhabited island where they find a wrecked sealing ship, and its desperate crew. But when the ship's captain is murdered, all fingers point to Forsythe.

Wiki knows that Forsythe is capable of such violence, but he believes him innocent and is duty-bound to prove it for the sake of the expedition. Is this a case of mutinous sealers taking the law into their own hands? Is it murky secrets from the past come back to haunt a dishonest and dishonourable captain? Or is Shark Island home to something more sinister than a few lonely goats?
More books by this author