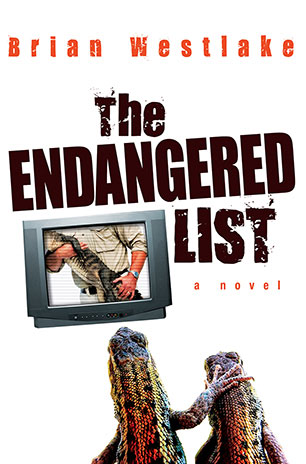 Who is killing the great wildlife presenters of Australia? And just who is Brian Westlake? A scathing, hilarious expose of the dog-eat-dog world of wildlife television.

For 20 years, Brian 'Frosty' Westlake has been the best mate, understudy, rigger and heir apparent to Australia's 'biggest export since wool', the TV naturalist Mick Lamington. Mick's worth a fortune, especially in the US, where the network and millions of viewers can't get enough of his laidback, larrikin joking around with the world's deadliest creatures.

When Mick dies in a bizarre accident while shooting an underwater documentary, the hugely profitable but highly leveraged house of cards he has built threatens to collapse - unless a replacement can be found to finish filming the series. Frosty's the real animal wrangler behind the scenes of the show, and knows he will be the perfect replacement for Mick. He is devastated when the job instead goes to ex-Chippendale model and scuba diver, Glenn Mellon. But then Mellon dies in another unlikely accident on the job, and Frosty is asked to compile a shortlist of nature presenters to take over the series.

Opportunity knocks and madness takes hold as Frosty - with a bit of help from his mates in the wild - figures out how to be the last man standing. No one is safe as his shortlist of Nature TV Legends starts looking more and more like an Endangered List

Funnier than fact and stranger than fiction, The Endangered List is a savage, scathing insider's look at what happens when the cameras stop rolling and the animals go wild. Nature television will never be the same again. And nor will Brian Westlake.
More books by this author

Brian Westlake was an alligator at Taronga Zoo in the 1970s and early 1980s. A cult figure of the era, he was sponsored by a growing band of schools and private individuals. Brian Westlake is also the pseudonym of an Australian writer.