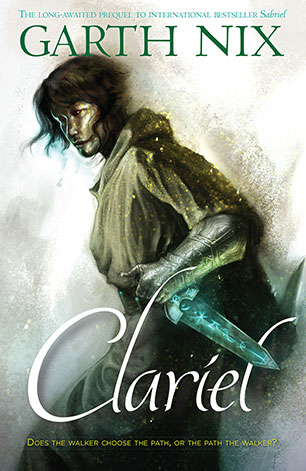 Does the walker choose the path, or the path the walker? An epic fantasy adventure, set six hundred years before Sabriel and as rich and compelling as the original Old Kingdom novels.

Clariel is the daughter of one of the most notable families in the Old Kingdom, with blood relations to the Abhorsen, and to the King. When her family moves to the city of Belisaere, Clariel finds herself at the centre of sorcery and intrigue: a plot is brewing against the old and withdrawn King Orrikan; her parents want to marry her off to a killer; and a dangerous Free Magic creature is loose in the city. When Clariel is drawn into the efforts to find and capture the creature, she finds hidden sorcery within herself, yet it is magic that carries great dangers. Can she rise above the temptation of power, escape the unwanted marriage and save the King?

'In this long-awaited prequel, Garth Nix shows us why his Old Kingdom books have influenced a generation of fantasy writers.' - Cassandra Clare, New York Times bestselling author of the Mortal Instruments and Infernal Devices series
More books by this author More books in this series

The prologue of Garth Nix’s Clariel frames a narrative through moments of mystery and fear, towards questions of identity. The novel’s title positions the protagonist as the central issue of the text and, given how in Australia today we see the flight from traditional roles by Generation Now, Nix has constructed a contemporary tool, useful as a template for selfhood, social and familial allegiance and the quest for meaning upon which all young people must embark.

Sure, the novel has weaknesses. The exposition unfolds in ways predictable to the genre but made interesting enough by well-turned expression. Those familiar with Nix’s work and, most likely, the younger reader, will lap up the familiarity of the families, the magistry of the Charter as tradition battles the wantonness of Free Magic, the careful construction of place and the quirkiness of characterisation.

Clariel is an adolescent and a nascent woman. Nix deals with sexuality by denial, accounting Clariel as one experienced in the act but indifferent to its relational complexities. Thus freeing her to pursue a gender-neutral path through swiftly fluctuating scenarios of social etiquette, subterfuge and sweeping violence. The conflicted central character is a pawn in the ambitions of forces which clatter about her; forces that lead to her parents’ assassination in a delicious battle where Clariel’s mother, Jaciel exhibits her berserker nature: “She leaned over and licked the blood from her shoulder, the smear of it frightful around her mouth. She laughed…”

And yet, Nix embeds with his use of language the occasional challenge to the traditional discourse that asks for a readership beyond those seeking the mundane adventure of a genre, which can lack subtlety. “A shepherd waved to them, her flock of sheep on the slope below…”

It is not until the protagonist asserts herself that the story rises above plot and becomes the engaging challenge that has swum below the surface until this point. Mogget, an ensorcered cat, asks profoundly “And who might you be?” Well might the cat ask, as it unfolds double levels of betrayal in combination with the truly dreadful Aziminil and Baazalanan.

Clariel’s eventual fate is to be turned, damaged, scarred and masked into a northwards sailing boat to a forest: “Not her Forest, but a forest somewhere.” She is a sequel in waiting. Clariel’s fate, I fear is to be a marvellous piece of young adult fiction but not one that crosses into the literary stratosphere with which it so genuinely flirts.
Gerard Benfield, English Teacher, Emmanuel Anglican College, NSW

A wonderfully intricate fantasy world where magic is second nature; this novel is the prequel to the Old Kingdom series. While this novel can be read separately, I am sure it will draw new readers to the series.

Clariel is seventeen, her parents have just moved the family to the city of Belisaere and she hates it - she hates the buildings and the closeness of the people, so many people, she would have rather stayed at Estwael or better yet, been able to join the Borderers and live in the Great Forest.

Clariel, being a typical teenager, does not see beyond what she wants and how things affect her, she is surprised to learn that her mother is considered the best goldsmith in the land, as well as being related to the king and that her family could be caught up in Governor Kilp’s scheme to take control of the kingdom.
Clariel resents having to go to school to learn how to dress and act, she is not interested in learning Charter Magic, even if people think she has a natural talent for it, she spends all her time trying to find a way to run away to the Great Forest.

With a tragic turn of events, Clariel comes to the realisation that she needs to take a stand for what is right but due her lack of experience, she is duped by a free magic creature with disastrous consequences.

In this novel, Clariel grows from a self-absorbed teenager into a young woman who takes a stand for what she believes is right, and deals with the consequences of her actions.
I would recommend this novel to readers of Fantasy Fiction and teachers who were looking for a novel that illustrates making difficult choices.
Jan O’Sullivan, Library Technician, Yarra Hills Secondary College, VIC