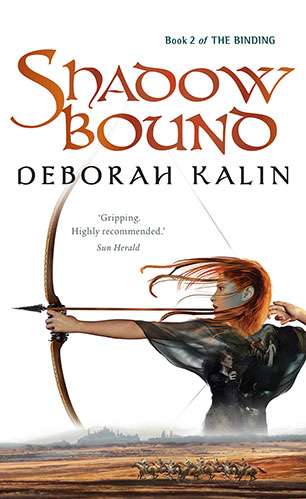 The conclusion to The Binding series sees Shadow Queen Matilde returned to her throne, but with many more battles to fight before she can secure a free future for herself and her people.

In winning back her throne from her conquerer husband, Dieter, Matilde of the House of Svanaten has swapped one leash for another.

Sidonius, the man she has been forced to swear a vow of vassalage to in exchange for his military support, is the famed slave-born general of the Ilthean empire, and has conquered every land he's invaded - including Matilde's.

Worse, although Dieter has fled, he is not yet defeated. His forces launch strike after strike, sorely testing Matilde's new and uncertain hold on power. Every day he remains uncaptured drives Matilde deeper into the debt of the Ilthean empire.

Shadow Bound is Deborah Kalin's second novel, and the sequel to Shadow Queen. Deborah won a university medal in Chemical Engineering and started out practising in this field. Such was her dedication to becoming a published author, however, that she decided to give up her profession and do administrative work to allow her to devote her energy to writing. She now lives in Melbourne where she works as a patents examiner.