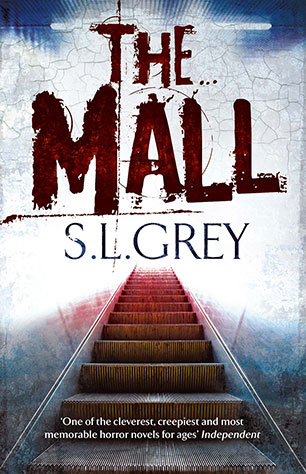 'One of the cleverest, creepiest and most memorable horror novels for ages' Independent

Dan works at a bookstore in a deadly dull shopping mall where nothing ever happens. He's an angsty emo-kid who sells mid-list books to mid-list people for the minimum wage. He hates his job. Rhoda has dragged her babysitting charge to the mall so she can meet her dealer and score some coke. Now the kid's run off, and she has two hours to find him. She hates her life. Rhoda bullies Dan into helping her search, but as they explore the neon-lit corridors behind the mall, disturbing text messages lure them into the bowels of the building, where old mannequins are stored in grave-like piles and raw sewage drips off the ceiling. The only escape is down, and before long Dan and Rhoda are trapped in a service lift listening to head-splitting musak. Worst of all, the lift's not stopping at the bottom floor. Plummeting into the earth, Dan and Rhoda enter a sinister underworld that mirrors their worst fears. Forced to complete a series of twisted tasks to find their way out, they finally emerge into the brightly lit food court, sick with relief at the banal sight of people shopping and eating. But something feels different. Why are the shoppers all pumped full of silicone? Why are the shop assistants chained to their counters? And why is a cafe called McColon's selling lumps of bleeding meat? Just when they think they've made it back to the mall, they realise their nightmare has only just begun.
More books by this author

Sarah Lotz and Louis Greenberg met in a pub while bunking a crime seminar and, as one does at pubs, discovered a mutual interest in horror. Sarah, a crime novelist and screenwriter, was a die-hard zombie fanatic; Louis, a literary writer, editor and recovering bookseller, had studied vampire and apocalyptic fiction. Rejecting their initial plans for a vampire-vs-zombie faceoff, they decided to write the first mainstream South African horror novel together and S.L. Grey was born.