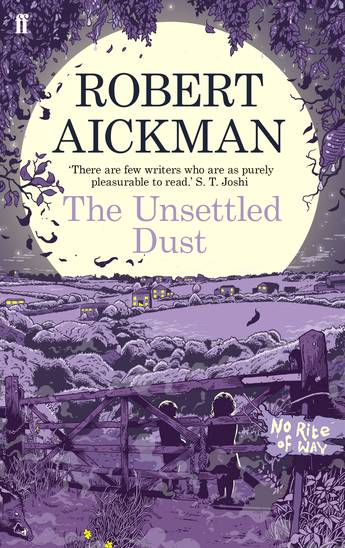 With a stunning new package, Unsettled Dust is set to reach a new generation of horror fans.

Robert Aickman, the supreme master of the supernatural, brings together eight stories where strange things happen that the reader is unable to predict. His characters are often lonely and middle-aged but all have the same thing in common - they are all brought to the brink of an abyss that shows how terrifyingly fragile our piece of mind actually is.

'The Next Glade', 'Bind Your Hair' and 'The Stains' appeared together in The Wine-Dark Sea in 1988 while 'The Unsettled Dust', 'The House of the Russians', 'No Stronger Than a Flower', 'The Cicerones' and 'Ravissante' first appeared in Sub Rosa in 1968. The stories were published together as The Unsettled Dust in 1990.

Aickman received the British Fantasy Award in 1981 for 'The Stains', which had first appeared in the anthology New Terrors (1980), before appearing in the last original posthumous collection of Aickman's short stories, Night Voices (1985).
More books by this author

Robert Fordyce Aickman was born in 1914 in London. He was married to Edith Ray Gregorson from 1941 to 1957. In 1946 the couple, along with Tom and Angela Rolt, set up the Inland Waterways Association to preserve the canals of Britain. It was in 1951 that Aickman, along with Elizabeth Jane Howard, published his first ghost stories entitled We Are the Dark. Aickman went on to publish eleven more volumes of horror stories as well as two fantasy novels and two volumes of autobiography. He also edited the first eight volumes of The Fontana Book of Great Ghost Stories. He died in February 1981.