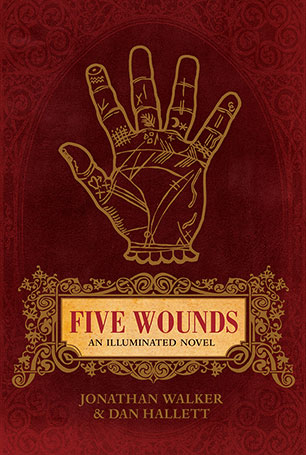 Inspired by Italo Calvino, Jeanette Winterson, Buffy the Vampire Slayer and the Uncanny X-Men, this surreal, darkly beautiful and unsettling graphic novel about five wounded orphans is by turns hilarious and horrific, grotesque and tender.

Behave, child, or the same might happen to you!

In a cruel and arbitrary world, where disturbing lapses in logic are commonplace, five orphans must face their traumatic origins.

Gabriella is a crippled angel, haunted by her inability to interpret prophecies. Cur is the rabid leader of a sect of dogs, desperate to escape his inheritance. Cuckoo is a gambler with a wax face determined to find a fixed identity before his luck runs out. Magpie is a thief in search of the perfect photographic subject, but terrified of going blind. Crow is a leper trying to distil the essence of death as an antidote to dying.

Each of them is deformed; each has a special ability; each is connected to all of the others. And each gets exactly what they deserve. Or do they?
More books by this author

Jonathan Walker was born near Liverpool, UK. He was educated in Glasgow and Cambridge, and is currently a Senior Research Fellow at the University of Sydney. His interests include card games, photography, comic books, cinema and contemporary music, along with the history of Venice, on which he has researched, lectured and written for over a decade. He has also worked as a volunteer in a community for homeless men, a security guard, a postman, a census taker, a billposter, and (for one evening only) a theatre usher.

Dan Hallett was born in Northampton, UK, and studied at the Anglia Ruskin University Art School in Cambridge. He now works in Barcelona as a textile designer and illustrator, where he also exhibits his paintings and drawings. Dan's first book as illustrator was Jonathan Walker's Pistols! Treason! Murder!