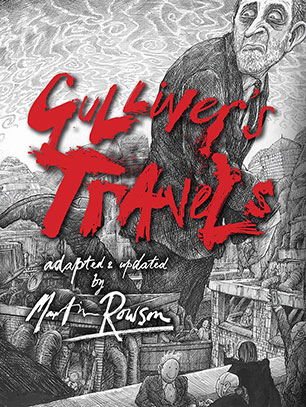 On 5 November 1699, the Merchant Ship Antelope foundered on a rock at the Latitude of 30 degrees 2 minutes south. The only survivor of the crew was the ship's physician, Lemuel Gulliver, who some hours later awoke, bound by hundreds of tiny ropes, lying on a beach in the Empire of Lilliput. On 31 August 1997, Gulliver's direct (although unwitting) descendent was being driven back from a conference in Paris when, travelling through an underpass, his vehicle was struck with great force from behind. Rendered unconscious, he was next aware of being thrown from a helicopter into a shallow sea. On awaking next morning, he found himself bound by hundreds of tiny ropes, lying on a beach and surrounded by tiny figures welcoming him to. a modern Lilliput. This is only the beginning of his adventures, as he finds himself, quite by chance, visiting the same places as his famous forebear, only three centuries later.

Jonathan Swift's classic satire about little people, big people, mad scientists and rational horses has not only gripped our imaginations for generations, it is also one of the greatest - yet most compassionate - indictments of humanity ever written. Martin Rowson's caustic and provocative updating of the story is both a homage to the original and an entirely up-to-date indictment of the enduring human idiocies that enraged Swift so magnificently and memorably 300 years ago.
More books by this author

Martin Rowson, born 15 February 1959, is a British cartoonist and novelist. His genre is political satire and his style is scathing and graphic. His work frequently appears in The Guardian and The Independent. He also contributes freelance cartoons to other publications, such as The Daily Mirror and the Morning Star.