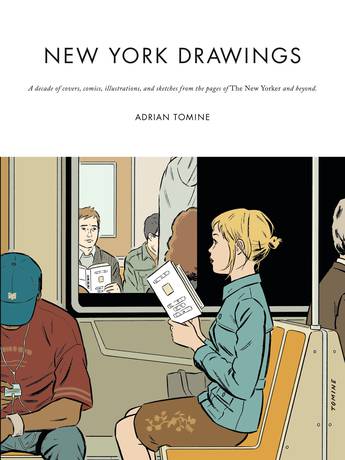 New York Drawings by Adrian Tomine features classic illustrations from The New Yorker cover artist ('one of the most masterful cartoonists of his generation' - Village Voice).

Two strangers, both reading the same novel, share a fleeting glance between passing subway cars. A bookstore owner locks eyes with a neighbor as she receives an Amazon package. Strangers are united by circumstance as they wait on the subway stairs for a summer storm to pass.

Instantly recognizable, Adrian Tomine's illustrations and comics have been appearing for over a decade in the pages (and on the cover) of The New Yorker.

New York Drawings is a loving homage to the city that Tomine, a West Coast transplant, has called home for the past seven years. This lavish, beautifully-designed volume collects every cover, comic and illustration that he has produced for The New Yorker to date, along with an assortment of other rare and uncollected illustrations and sketches. Complete with notes and annotations by the author, New York Drawings will also feature an all-new introductory comic (in the style of the final two pages of Optic Nerve #12).

Born in Sacramento in 1974, Adrian Tomine is the author of the acclaimed series Optic Nerve, that has been running since 1991. His work has also appeared in the New Yorker and Esquire, among other publications. His books include Shortcomings, which was awarded the Gold Medal at the 2008 IPPYS and was a 2007 New York Times Notable Book, Summer Blonde, Sleepwalk, Scenes From an Impending Marriage, and, most recently, New York Drawings, all of which are published by Faber in the UK.

Adrian Tomine on his first cover for The New Yorker >