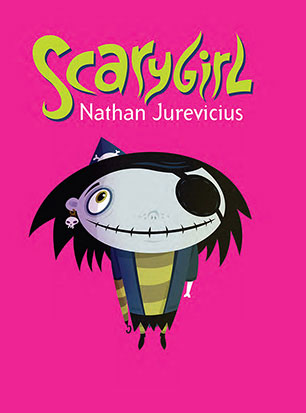 A sensational graphic novel for fans and collectors, starring the cult character, Scarygirl, whose designer toys, online comic, game and artwork have won her millions of fans world-wide.

Abandoned on a remote beach, Scarygirl doesn't know who she is or where she's come from. Blister, a kind and intelligent giant octopus, wants to keep her safe, but Scarygirl needs answers. Who is the strange man haunting her dreams? Will Bunniguru help her unlock the mysteries of her past? Can she trust the wily forest dwellers? Her journey takes her to the edge, and beyond .

Welcome to the world of Scarygirl.

'I often lose myself in the world of Scarygirl. I adore amazing artwork filled with numerous hidden details wonderful contrast between darkness, light everything between. There's a great theme of friendship and love - two most important things in the world' - Matias Roskos, visualblog.de

'Nathan Jurevicius has contrived a universe filled with eccentric creatures, deep secrets, and common objects that routinely come to life. It's a spectacle that, like a luscious confection, makes you want more and more.' - Gina Garan, thisisblythe.com
More books by this author

Nathan Jurevicius was born in 1973 in Bordertown, a place made famous for its meat factory and as the birthplace of Bob Hawke. At the age of six he had his first one-man show, selling three pieces, including the legendary 'Woman with a fly on her nose in a phonebox'. Today Nathan is an artist with sell-out shows around the world. Scarygirl is his most popular character so far, with an online comic, artwork and prints, and a range of vinyl toys.