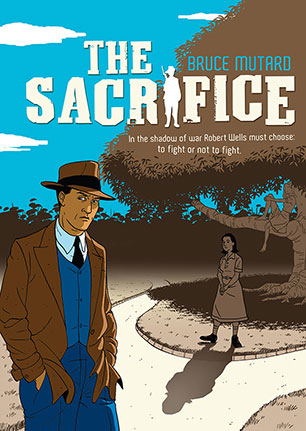 Set in Melbourne in the shadow of WWII, this graphic novel deals with war, ideals, family and love. With a distinctive cast of characters and strong themes, this book will resonate with a broad audience. Book One of the Robert Wells trilogy.

Pacifist Robert Wells finds his ideals challenged with the outbreak of World War II. As a Catholic, a socialist, and an Australian who remembers what the last war cost his family and country, he is firmly against fighting, but his intellectual beliefs struggle with the emotional pull to enlist. Family duties and his sense of responsibility for German refugees heighten the internal conflict. In this first volume of a trilogy, Mutard, cofounder of the Australian journal Comics Quarterly, skillfully explores Australia's home front, examining issues such as refugee integration, anti-Semitism, socialism, and government censorship. The intense philosophical discussion can slow the story's momentum, but there is plenty of human drama. The physical sense of place is equally strong: you can practically feel the heat and smell the dust in the detailed black-and-white art. Verdict One man's moral struggle illuminates Australia's experience of World War II. The wealth of social and political detail will appeal to history buffs seeking a fresh perspective on the period, and the thoughtful look at the social costs of war has contemporary relevance as well. Coarse language and mature content make this suitable for adult collections. [Xpress Reviews, The Library Journal, 13/08/2012].

The first of three planned volumes, this heavy (in both size and content) graphic novel explores the Australian experience during WWII. It's slow going and talky, as various characters converse about world events beginning in 1939, impending war, and continuing economic struggles. The lead, Robert Wells, has a management job and a bent to pacifism. He's left the Catholic Church although he still believes in God. He's fascinated by the talented voice of the daughter of German refugee neighbors, although put off by the way she's been indoctrinated with ideas about the superiority of her type. His brother joins the military; his girlfriend supports communism; the young girl runs wanton during the war. They all debate capitalism, restrictive government policies, the economy, ethics, and religion. A glossary would have been appreciated for non-Aussie readers not familiar with the slang, cultural terms, and local leaders of the time, although much can be determined by context. The art is historically evocative heavy, but sometimes stiff. The story reads as though looking at a series of old photographs, an intriguing personal glimpse of history that rewards those who are willing to learn more of the Australian experience, but probably without mass appeal outside its native land. (Publisher's Weekly 13/08/2012].