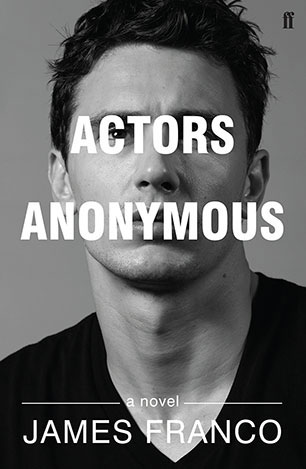 From acclaimed Hollywood actor/director James Franco, a dark, genre-bending work that mixes memoir and pure invention in an audacious examination of celebrity, acting and the making of fiction.

Inspired by Alcoholics Anonymous's 12 Steps and 12 Traditions, Actors Anonymous is a dark, genre-bending work that mixes memoir and pure invention in an audacious examination of celebrity, acting and the making of fiction.

Actors Anonymous is unsettling, funny and personal - a series of stories told in many forms: a McDonald's drive-thru operator who spends his shift trying on accents; an exchild star recalling a massive beachside bacchanal; hospital volunteers putting a camera in the hands of a patient obsessed with horror films; a vampire-flick starlet who discovers a cryptic book written by a famous actor, who may have killed his father and gone on the run.

The book contains profound insights into the nature and purpose of acting. Franco mercilessly turns his 'James Franco' persona inside out while, at the same time, providing a fascinating meditation on his art, along with nightmarish tales of excess. 'Hollywood has always been a private club,' he writes. 'I open the gates. I say welcome. I say, Look inside.'

Franco's writing is vivid and disturbing, but what distinguishes his work is the great compassion he extends towards his characters, who he presents in all their raw humanity, while at the same time providing insight into their deeper selves.
More books by this author

James Franco is a modern-day Renaissance man: as an actor he won the Golden Globe award for his portrayal of James Dean in a tv bio-pic of the actor's life and has appeared in such diverse films as Pineapple Express and Milk; he plays the lead in Danny Boyle's new film 127 Hours and portrays Allen Ginsburg in Howl; he has collaborated with an artist called Carter in conceptual film piece and has shown his work at the Deitch Projects in New York; over the course of the last two years he has been awarded degrees in English Literature from UCLA, in Creative Writing from Columbia, in Film-making from NYU and has been accepted in the English PH.D program at Yale.