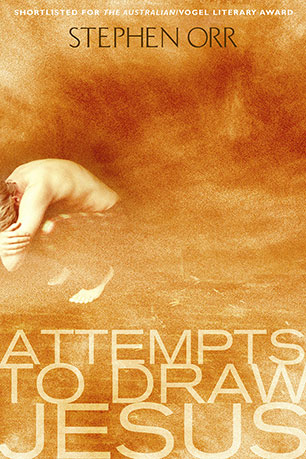 Shortlisted in The Australian/Vogel Literary Award. Attempts to Draw Jesus follows the lives of two teenage boys in the Australian outback, the track they lose and the mark they leave behind.

Set against a red desert landscape, Attempts to Draw Jesus follows the lives of two teenagers in unfamiliar surroundings.

In his gran's day, jobs weren't a problem. But when Jack Alber gets laid off from the local servo there aren't many options. He's only seventeen and in his small town there is only the need for one chemist and one butcher.

And from his scribblings in his journal, it's evident that Clive 'Rolly' Rollins is more interested in observing life than living it. He earns his dole by applying for jobs he doesn't want, dreaming away his days in Adelaide's city streets, strolling, watching and writing.

Jack's and Rolly's fates are changed irrevocably when they both answer an ad to work as jackaroos for a remote outback station. The Simpson Desert will allow both to prove something to themselves and to their families and friends. A landscape of endless Mitchell grass and gibber plains will provide experiences they'd never find back home. But all it takes to change their world is one wrong turn.

Attempts to Draw Jesus is a fresh, contemporary novel, rich with honesty and a distinctive insight into young lives.
More books by this author

Stephen Orr was a runner-up in the 2000 The Australian/Vogel Literary Award for his first novel, Attempts to Draw Jesus. He is currently working on a novel about a religious cult in the Barossa Valley of the 1950s. He lives in Adelaide with his wife and two sons, teaching science and horticulture in between bouts of writing.