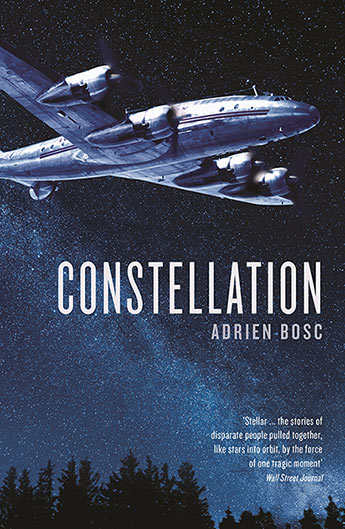 The best-selling debut novel based on the true story of a tragedy - now in paperback. Winner of the prestigious Academie Francaise Prize.

On 27 October 1949, a Lockheed Constellation passenger plane left Paris for New York. Hours later, it disappeared on approach to its scheduled stopover in the Azores. It was found on a mountainside five miles from its intended landing zone.

There were no survivors.

Among those lost in the accident were heavyweight boxer Marcel Cerdan flying to New York for a world title fight; 30-year-old virtuoso violinist Ginette Neveu; Kay Kamen, Walt Disney's merchandising tsar; five Basque shepherds emigrating to America; a pilot who ran missions for the Free French during the war.

Constellation tells the untold true stories of the forty-eight men and women who died on board, and paints a moving portrait of their place in the changing post-war world and of their hopes and dreams for the life awaiting them across the Atlantic.

Adrien Bosc's magnetic debut novel is a memorial to an air disaster that happened half a century ago. But it is also a love song to the forgotten lives that every tragedy scatters around it like so much debris, and a poignant investigation into the nature of collective tragedy.
More books by this author

Adrien Bosc was born in Avignon in 1986. He is the founder of Editions du sous-sol and the magazines Desports and Feuilleton. Constellation is his first novel.