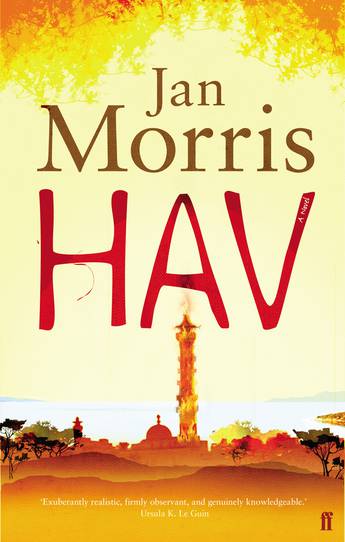 When the world's foremost travel writer describes the small city-state of Hav, it is unlike any of her other books. For Hav exists only in one special place - Jan Morris's imagination.

Hav gives us Jan Morris at her most delightful and most suggestive. The city is a magical place - yet behind its arcane splendours are darker implications. The traditional Roof Race is peculiarly exciting, the waterfront is picturesque, the wistful call of a trumpeter from a distant rampart is wonderfully evocative, and every street corner is haunted by memories of illustrious visitors: Freud, Diaghilev, Marco Polo, Lawrence of Arabia and countless others. But Morris's visit ends in flight when an unidentified enemy arrives to seize control.

When Jan Morris returns to Hav, some twenty years later, she finds that her account of her earlier visit is banned and discovers a place that has rebuilt itself, transformed by a new energy and now dominated by a totemic tower 2000 feet tall. But as the old Hav was in many ways an allegory of the last century, so the city in its new incarnation offers no less elusive hints, echoes and portents of our 21st century world. As a destination it remains as entertaining as ever.
More books by this author

Jan Morris was born in Somerset in 1926 and received her B.A. in 1951 and her M.A. in 1961, both from Christ Church, Oxford. Dubbed the 'Flaubert of the jet age' by Alistair Cooke, and 'perhaps the best descriptive writer of our time' by Rebecca West, Jan Morris has written studies of Venice, Oxford, Manhattan, Sydney, Hong Kong, Spain and Wales. She is the author of the Pax Brittanica trilogy about the British Empire, two autobiographical books, six volumes of collected travel essays and a novel.