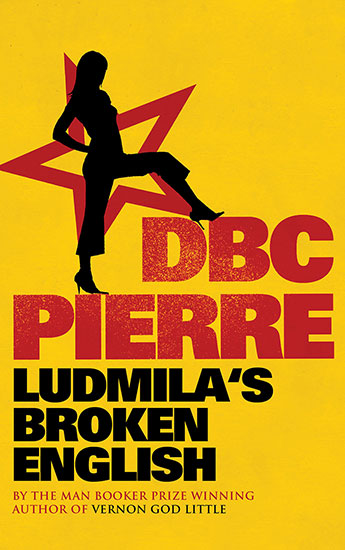 The outrageously funny new novel from the Booker-winning author of Vernon God Little.

DBC Pierre's second novel charts the unlikely meeting between East and West that follows Ludmila Derev's appearance on a Russian brides website. Determined to save her family from starvation in the face of marauding Gnez troops, Ludmila's journey into the world and womanhood is an odyssey of sour wit, even sourer vodka, and a Soviet tractor probably running on goat's piss.

Thousands of miles to the West, the Heath twins are separated after 33 years conjoined at the abdomen. Released for the first time from an institution rumoured to have been founded for an illegitimate child of Charles II, they are suddenly plunged into a round-the-clock world churning with opportunity, rowdy with the chatter of freedom, democracy, self-empowerment and sex.

A wild and raucous picaresque dripping with flavours of British bacon and nasty Russian vodka, Ludmila's Broken English is a tale of tango-ing twins on a journey into the unknown. A ride so outrageously improbable it just may happen, DBC Pierre's second novel confirms his place in the ranks of today's most original storytellers.
More books by this author

DBC Pierre was born in Reynella, South Australia. He was raised in Mexico between the ages of seven and twenty-three, although he has also travelled extensively. DBC Pierre has worked as a designer and cartoonist, and currently lives in County Leitrim, Ireland. Vernon God Little, his first novel, won the 2003 Bollinger Everyman Woodhouse Award, the Whitbread Prize for Best First Novel, and the 2003 Man Booker Prize. He is the author of Ludmila's Broken English (2006) and the forthcoming novel Lights Out in Wonderland (Sept 2010).