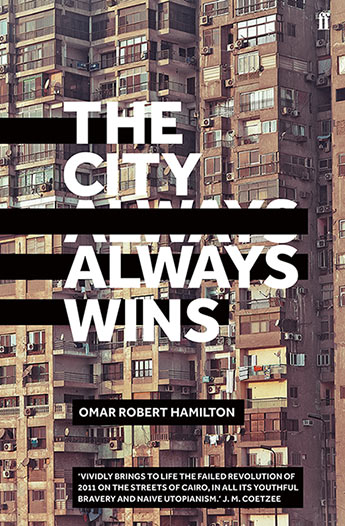 A thrilling and important debut about the Arab Spring - and a generation that tried to change the world - from an exciting and talented new voice.

This is a revolution. On the streets and in the clubs of Cairo, a political uprising is fermenting that will change the course of modern history. Mariam and Khalil, young activists and film-makers committed to their ideals, are swept up in a blaze of revolutionary fervour that will change their lives for ever.

Omar Robert Hamilton's extraordinary debut captures the feverish intensity and trauma of one of the century's defining uprisings: the 2011 Egyptian revolution. From the euphoria of mass protests to the chilling silence of the morgue, The City Always Wins is a hugely ambitious novel of breathless, dazzling scope. In this electric sketch of a vibrant city - alive and teeming with political unrest - Cairo is both the backdrop and focus of the novel, as the author crafts unbearably vivid images with a filmmaker's voracious eye. With razor-sharp dialogue and unforgettable characters, The City Always Wins is the only book that allows readers to pierce to the bloody heart of this uprising. Arrestingly visual, piercingly lyrical, and intensely political, this is the definitive novel of the Arab Spring channelling the voices of those who were really there. Brave, raw, and urgently contemporary, Omar Robert Hamilton looks set to become the defining voice of his generation.
More books by this author

Omar Robert Hamilton is an award-winning filmmaker and writer. He has written for the Guardian, the London Review of Books and Guernica. He co-founded the Mosireen media collective in Cairo and the Palestine Festival of Literature. This is his debut novel. www.orhamilton.com