The Core of the Sun 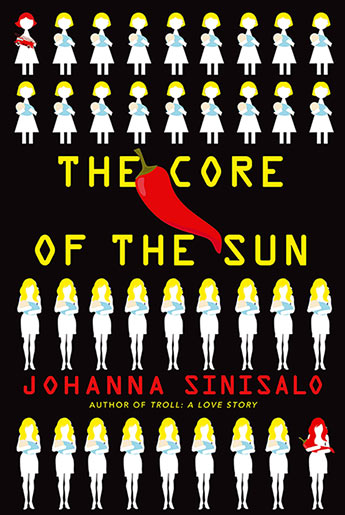 From the queen of 'Finnish weird', a captivating and witty speculative satire of a Handmaid's Tale-esque welfare state where women are either breeders or outcasts, addicts chase the elusive high of super-hot chilli peppers and one woman is searching for her missing sister.

The Eusistocratic Republic of Finland has bred a new human sub-species of receptive, submissive women, called eloi, for sex and procreation, while intelligent, independent women are relegated to menial labour and sterilized. Vanna, raised as an eloi but secretly intelligent, needs money to help her doll-like sister, Manna.

Vanna forms a friendship with a man named Jare, and they become involved in buying and selling a stimulant known to the Health Authority to be extremely dangerous: chilli peppers. Then Manna disappears, and Jare comes across a strange religious cult in possession of the Core of the Sun, a chilli so hot that it is rumoured to cause hallucinations.

Does this chilli have effects that justify its prohibition? How did Finland turn into the North Korea of Europe? And will Vanna succeed in her quest to find her sister, or will her growing need to satisfy her chilli addiction destroy her?

Johanna Sinisalo's tautly told story of fight and flight is also a feisty, between-the-lines social polemic - a witty, inventive, and fiendishly engaging read from the queen of 'Finnish Weird'.
More books by this author

Johanna Sinisalo is the author of the novels Troll: A Love Story, Birdbrain and The Blood of Angels. Praised by readers and critics alike, she has won several literary prizes, among them the Finlandia Prize and the James Triptree Jr. Award. Her works have been translated into nineteen languages. She lives in Finland.