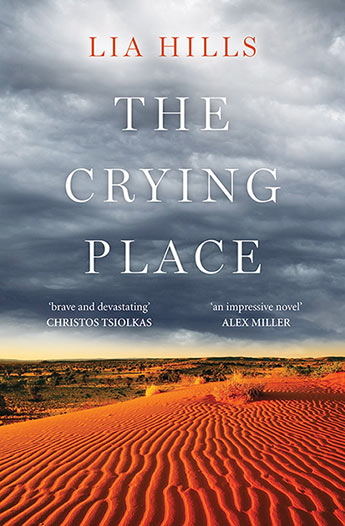 A stunning literary debut that takes the reader into the mysteries and truths that lie at the heart of our country.

In the rear vision, the road was golden and straight and even, its length making sense of the sky, of the vast black cloud that was set to engulf it. I pulled over and got out. Stared at it, this gleaming snake - where I'd been, where it was going. The route that Jed had once taken.

After years of travelling, Saul is trying to settle down. But one night he receives the devastating news of the death of his oldest friend, Jed, recently returned from working in a remote Aboriginal community. Saul's discovery in Jed's belongings of a photo of a woman convinces him that she may hold the answers to Jed's fate. So he heads out on a journey into the heart of the Australian desert to find the truth, setting in motion a powerful story about the landscapes that shape us and the ghosts that lay their claim.

The Crying Place is a haunting, luminous novel about love, country, and the varied ways in which we grieve. In its unflinching portrayal of the borderlands where worlds come together, and the past and present overlap, it speaks of the places and moments that bind us. The myths that draw us in. And, ultimately, the ways in which we find our way home.

'An impressive novel of friendship and the haunting contradictions at the base of Australian society.' ALEX MILLER , author of Coal Creek WC

'A brave and devastating novel of grief, place and belonging. I was swept up in her voice and by her storytelling skills right from the opening pages and I wasn't released back into the world until I reached the end. Even then, the novel doesn't let you go. Its grace, its compassion and its deep humanity make you see our country anew.' CHRISTOS TSIOLKAS, author of The Slap
More books by this author

Lia Hills is a poet, novelist and translator. Her debut novel, The Beginner's Guide to Living, was released to critical acclaim and was shortlisted for the Victorian, Queensland and Western Australian Premiers' Literary Awards and the New Zealand Post Book Awards. It has been translated into several languages. Other works include her award-winning poetry collection the possibility of flight and her translation of Marie Darrieussecq's acclaimed novel, Tom is Dead. She lives with her family in the hills outside Melbourne.