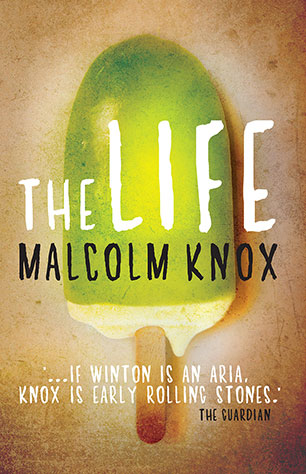 Daring, dazzling, funny and heartbreaking, this is a story about fame and ambition, surfing and pine-lime Splices . a superbly written and ambitious novel by one of Australia's rising stars. The Life will simply blow you away.

The Life tells the story of former-world-champion Australian surfer, Dennis Keith, from inside the very heart of the fame and madness that is 'The Life'.

Now bloated and paranoid, former Australian surfing legend Dennis Keith is holed up in his mother's retirement village, shuffling to the shop for a Pine-Lime Splice every day, barely existing behind his aviator sunnies and crazy OCD rules, and trying not to think about the waves he'd made his own and the breaks he once ruled like a god. Years before he'd been robbed of the world title that had his name on it - and then drugs, his brother, and the disappearance and murder of his girlfriend and had done the rest. Out of the blue, a young would-be biographer comes knocking and stirs up memories Dennis thought he'd buried. It takes Dennis a while to realise that she's not there to write his story at all.

Daring, ambitious, dazzling, The Life is also as real as it gets - a searing, beautiful novel about fame and ambition and the price that must sometimes be paid for reaching too high.
More books by this author

Malcolm Knox is the author of Summerland, A Private Man and Jamaica, which was shortlisted for the Prime Minister's Award last year and won the Colin Roderick Award. He is also a Walkley-Award-winning journalist and author of many non-fiction titles. He came late to surfing, but is now an obsessively enthusiastic surfer, and writes about surfing and the surf with authority and great passion.