The Man Who Spoke Snakish 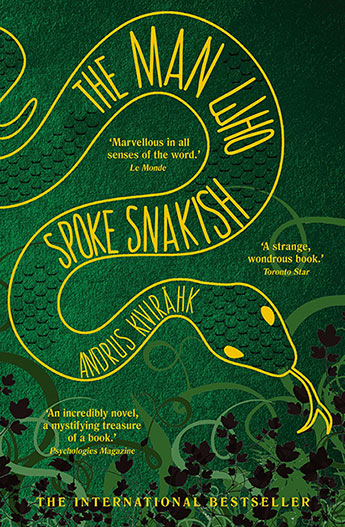 A runaway bestseller in Europe where the book is so well known that a popular board game has been created based on it, The Man Who Spoke Snakish is an extraordinary coming-of-age story, mixing magical realism, reinvented national myth and satire.

Unfortunately people and tribes degenerate. They lose their teeth, forget their language, until finally they're bending meekly on the fields and cutting straw with a scythe.

Leemut, a young boy growing up in the forest, is content living with his hunter-gatherer family. But when incomprehensible outsiders arrive aboard ships and settle nearby, with an intriguing new religion, the forest begins to empty - people are moving to the village and breaking their backs tilling fields to make bread. Meanwhile, Leemut and the last forest-dwelling humans refuse to adapt: with bare-bottomed primates and their love of ancient traditions, promiscuous bears, and a single giant louse, they live in shacks, keep wolves, and speak to snakes.

Told with moving and satirical prose, The Man Who Spoke Snakish is a fiercely imaginative allegory about a boy, and a nation, standing on the brink of dramatic change.
More books by this author

Andrus Kivirahk is one of Estonia's most highly regarded contemporary writers. A journalist by profession, he is known for his satirical newspaper columns and his bestselling novels. A popular board game has been created on the basis of The Man Who Spoke Snakish. He lives in Tallinn, Estonia.

Christopher Moseley is a translator of Estonian and Latvian. He teaches at University College London and is Treasurer of the Foundation for Endangered Languages.