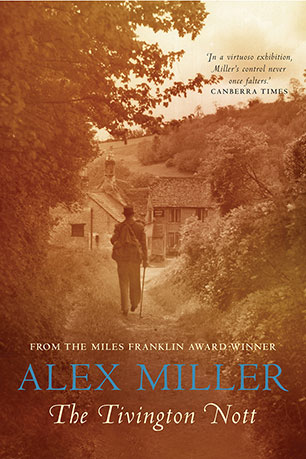 An extraordinarily compressed powerhouse of a novel, at once wholly original, gripping and mysterious. While The Tivington Nott is only Alex Miller's second novel, it has all the hallmarks of this two-times Miles Franklin winner.

Based on the lives of real people in Somerset on the borders of Exmoor, Miller tells his own story of a young labourer swept up in the adventure of riding second horse in a west country stag hunt. Finding himself in a closed social system in which he has neither status nor power, the young man identifies with the aberrant Tivington nott stag, which, despite its lack of antlers, has become a legend in the district for its ability to elude the hunt and to compete successfully with the antlered stags.

'This meditation on the condition of wildness, on being an outsider, is one of the most original pieces of writing of the year.' - Melbourne Herald

Alex Miller is twice winner of Australia's premier literary prize, The Miles Franklin Literary Award, first in 1993 for The Ancestor Game and again in 2003 for Journey to the Stone Country. He is also an overall winner of the Commonwealth Writers' Prize, in 1993 for The Ancestor Game. His fifth novel, Conditions of Faith, won the Christina Stead Prize for Fiction in the 2001 New South Wales Premier's Awards. In 2011 he won this award a second time with his most recent novel Lovesong. Lovesongalso won the People's Choice Award in the NSW Premier's Awards, the Age Book of the Year Award and the Age Fiction Prize for 2011. In 2007 Landscape of Farewellwas published to wide critical acclaim and in 2008 won the Chinese Annual Foreign Novels 21st Century Award for Best Novel and the Manning Clark Medal for an outstanding contribution to Australian cultural life. It was also short-listed for the Miles Franklin Award, the Christina Stead Prize for Fiction, the ALS Gold Medal and the Commonwealth Writers' Prize. Alex is published internationally and widely in translation.