To Become a Whale 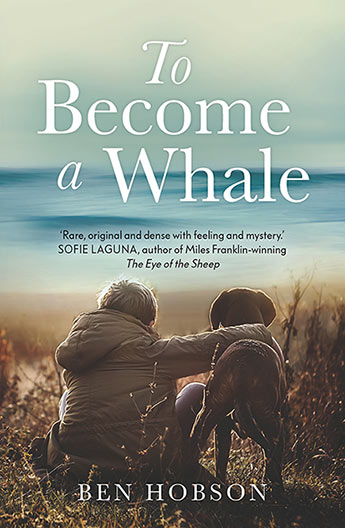 The story of a young boy who has recently lost his mother, trying to make sense of the world of men and then embarking on a breathtaking adventure of his own - a stunning literary debut in the tradition of Favel Parrett's Past the Shallows and Tim Winton's An Open Swimmer.

'Hobson takes us to the depths of cruelty to show us life. A boy tries to be a man, a man tries to be a father, and both struggle to navigate what it means to be men. A great study in masculinity.'
WILLY VLAUTIN, author of Lean on Pete and The Free

'A powerful tale of fathers and sons and all that can't be spoken between them. The writing is honest, rich and clean, and it made me feel so much. Too many writers fuss things up, but Ben tells it simply, which is so affecting.'
SOFIE LAGUNA, author of Miles Franklin-winning The Eye of the Sheep

To Become a Whale tells the story of 13-year-old Sam Keogh, whose mother has died. Sam has to learn how to live with his silent, hitherto absent father, who decides to make a man out of his son by taking him to work at Tangalooma, then the largest whaling station in the southern hemisphere. What follows is the devastatingly beautiful story of a gentle boy trying to make sense of the terrible reality of whaling and the cruelty and alienation of his new world, the world of men.

Set around Moreton Island and Noosa in 1961, To Become a Whale is an extraordinarily vivid and haunting novel that reads like an instant classic of Australian literature. There are echoes of Craig Silvey, Favel Parrett, Tim Winton and Randolph Stow in this moving, transformative and very Australian novel.
More books by this author

Ben Hobson lives in Brisbane and is entirely keen on his wife, Lena, and their two small boys, Charlie and Henry. He currently teaches English and Music at Bribie Island State High School. In 2014 his novella, If the Saddle Breaks My Spine, was shortlisted for the Viva La Novella prize, run by Seizureonline. To Become a Whale is his first novel.