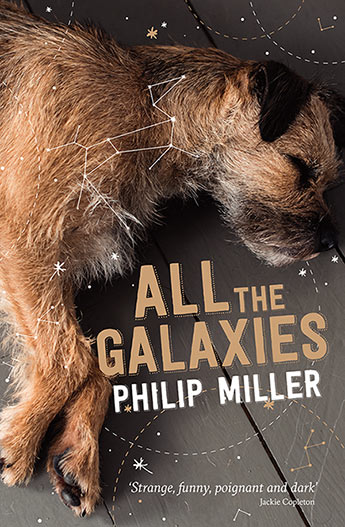 The Lovely Bones meets Margaret Atwood in this extraordinary, deeply moving, supernatural story of a young man's journey to find his mother.

'Unsettling and uncommon and darkly atmospheric, with disarming flashes of hope and beauty.'
Helen Sedgwick, author of The Comet Seekers

The Lovely Bones and The Book of Strange New Things meets Margaret Atwood in this unique, transcendent and deeply moving story.

John Fallon is a disillusioned journalist on a failing Glasgow newspaper. After a second failed independence referendum, Scotland is in turmoil, having broken into a number of autonomous city states. But Fallon has trouble closer to home: his son Roland has gone missing after a peaceful student protest turns violent at the hands of the newly militarised police.

In another world, a boy is wakened in the afterlife by his spirit guide, his beloved childhood dog, Kim. Kim takes the boy on a journey to the planets where the dead go, where he hopes to find his long dead mother.

As the boy and his dog make a shocking discovery that requires an impossible choice, Fallon searches for his son, discovering along the way that a great deal more is at stake than the future of one nation. In All the Galaxies, Philip Miller presents a mesmerising morality tale that proves both a compulsive page-turner and unforgettable emotional journey.
More books by this author

Philip Miller has been Arts Correspondent for the Scotsman, the Sunday Times in Scotland and theHerald, and has twice been named Arts Writer of the Year. His stories and poetry have been published widely.

All the Galaxies Chapter Sampler by Allen & Unwin on Scribd