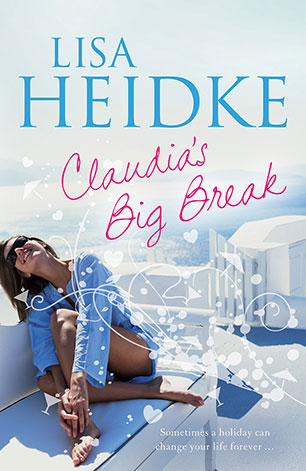 Claudia's life is a mess until she and two friends take a break from their lives with a Greek island holiday. With a bit of drunken karaoke, a serving of unexpected romance and life will never be quite the same for any of them again.

Claudia Taylor's life is a mess.

Her twenties and thirties seem to have disappeared in a haze of boring office jobs, unsuitable shags and superficial spending. Her latest disaster? An ill-advised fling. In an attempt to get some perspective on her life, Claudia jets off to glorious Santorini with her two best friends, Tara and Sophie. But it's not long before they're shaking their heads at some of Claudia's shenanigans.

Meanwhile, Sophie and Tara are wrestling with their own issues. Sophie, a former high-flying career woman, is struggling with being a stay-at-home mother and her husband's nasty ex-wife. Tara, meanwhile, is sick of her dead-end job and trying to write a novel.

Claudia's Big Break is an hilarious novel about friendship, romance, laughter and loyalty. It's also about three women taking stock of their lives - with a bit of drunken karaoke thrown in to the mix. For Claudia and her friends, life will never be the same after their much-needed holiday in paradise.
More books by this author

Lisa Heidke studied journalism at Queensland University, fled Brisbane and settled in Sydney where she landed a job as an Acquisitions Editor in book publishing (HBJ). After a while there, she headed to ACP where she worked as a feature writer on several national magazines. After many years living in Sydney's inner west, Lisa woke up one morning to find herself married with three children and living on the North Shore - much to her surprise and sometimes horror. Since then she has authored two uproarious novels, Lucy Springer Gets Even and What Kate Did Next.