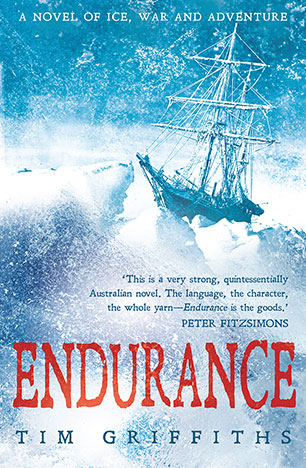 A gripping, white-knuckle novel set in the Antarctic and the muddy fields of the Western Front, told through the eyes of real-life adventurer and pioneer Australian photographer Frank Hurley.

This novel tells the story of a real-life Australian hero, photographer, explorer and adventurer Frank Hurley. It is a story told through his eyes and in his words, and it reveals a tantalising portrait of the man behind the legend he has become.

Hurley's photographs and documentaries of Douglas Mawson's and Ernest Shackleton's Antarctic expeditions, and his astounding images of World War I have been so widely exhibited and reproduced that in many cases they are the principal means by which we have come to see those world-shattering events. His iconic images of the ship Endurance trapped in an ocean of ice, of men battling the most extreme elements in the Antarctic, and suffering under unthinkable conditions in war are imprinted on the Australian consciousness. One writer has claimed that Frank Hurley 'is the twentieth century'.

Here now is the man, Hurley, telling us of his part in the two ill-fated Antarctic expeditions and recounting tales of great heroism and suffering as he fights for his life among the ice and the elements, and witnesses the worst ravages of war on the Western Front. Endurance is an extraordinary debut novel, a rollicking white-knuckle adventure story that also takes us to the very heart of heroism and sacrifice.
More books by this author

Tim lives in Sydney with his wife and four children. He works as a lawyer and arbitrator, and has a keen interest in Australian history. This is his first novel.

The Historical Novel Society says 'This is a spectacular tale all around, a superb example of how a biographical novel can bring history alive for those who may find academic versions too dry or daunting. Very highly recommended.'