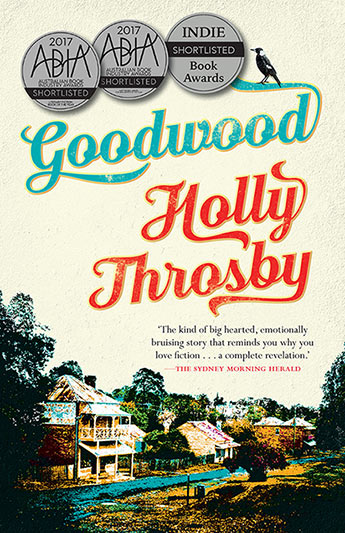 A delightful novel of secrets and small town obsessions from Australian musician and songwriter, Holly Throsby.

It wasn't just one person who went missing, it was two people. Two very different people. They were there, and then they were gone, as if through a crack in the sky. After that, in a small town like Goodwood, where we had what Nan called 'a high density of acquaintanceship', everything stopped. Or at least it felt that way. The normal feeling of things stopped.

Goodwood is a small town where everyone knows everything about everyone. It's a place where it's impossible to keep a secret.

People die in Goodwood, of course, but never like this. They don't just disappear.

As the intensity of speculation about the fates of Rosie and Bart heightens, Jean, who is keeping secrets of her own, and the rest of Goodwood are left reeling.

Rich in character and complexity, its humour both droll and tender, Goodwood is a compelling ride into a small community, torn apart by dark rumours and mystery.
More books by this author

Holly Throsby is a songwriter, musician and novelist from Sydney, Australia. She has released five solo albums, a collection of original children's songs, an album as part of the band Seeker Lover Keeper, and has been nominated for four ARIAs. Holly's debut novel, Goodwood (2016), was a critically acclaimed bestseller, shortlisted for the Indie and ABIA awards as well as the Davitt and Ned Kelly awards.