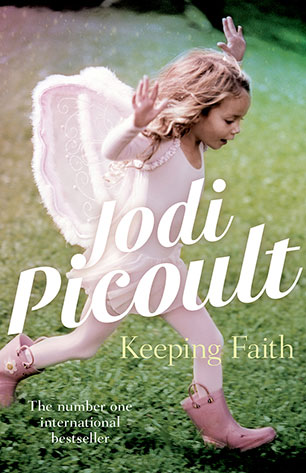 Mariah White is worried when her seven year old daughter Faith adopts an imaginary friend to help her cope with the aftermath of a messy divorce. She's even more worried however when her daughter says this invisible friend is God, and female.

At her controversial and compelling best, Jodi Picoult explores the moment when boundaries break down, and when the only step left to take is a leap of faith.

As Mariah White struggles with depression her seven-year-old daughter Faith seeks solace in a new friend-a friend who may or may not be imaginary. Faith talks to her 'Guard' constantly and begins to recite passages from the Bible-a book she's never read. After a succession of visits to psychiatrists, all of whom conclude Faith is not hallucinating, the unimaginable starts to seem possible: perhaps Faith may actually be seeing God. When Faith's cachet is enhanced by reported miracle healings and alleged stigmata, she is touted as a prophet.

Amidst the gathering storm of controversy, most disruptive of all is the arrival of two men: one a renowned television atheist who plans to debunk Faith's claims and help boost his flagging ratings, and the other her divorced father whose fear for his daughter's safety leads him to battle for custody. As Mariah finds herself fighting to keep her daughter, she has to push past her own insecurities and stand up for herself and her competence as a parent.

Keeping Faith explores a family plagued by the media, the medical profession, and organised religion in a world where everyone has an opinion but no one knows the truth.

JODI PICOULT is the author of twenty novels. Her most recent, Leaving Time, The Storyteller and Lone Wolf, have all been number one on the Australian and New Zealand fiction bestseller lists. Jodi lives in New Hampshire with her husband and three children. Read more about Jodi on her website: www.jodipicoult.com.au