Monkeys in the Dark 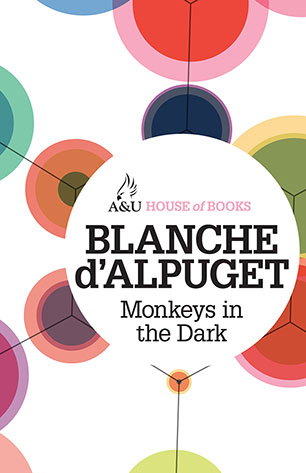 An exceptional portrayal of life and love in Indonesia among foreign residents after the 1965 coup.

Alexandra Wheatfield, a young journalist, has come to work in the Australian Embassy in Djakarta at a time of chaotic change: the coup of 1965 has been crushed, but the Indonesian Army has not yet overthrown the revered President Sukarno.

Sukarno has warned that without him the people will bring anarchy upon themselves, like 'monkeys in the dark'. The privileged Australian diplomats view this scene with benign contempt. The problem of security officer Frank Greaves and his prot g , Anthony Sinclair, is to find new sources of information and power in the crumbling and corrupt city.

But Alex sets her mind to a different task, attracting the affections of Maruli Hutabarat, an Indonesian poet who is in hiding for publicly supporting Sukarno's regime. Sexual tensions blaze, and Alex believes that she might have come to understand the deeply sensual but cruel city.

However, neither her love nor her wit can protect Alex against the demands of two conflicting societies. How deep a betrayal might people be willing to perform in the name of politics, and how brutal a sacrifice might one have to make in the name of 'security'?

Blanche d'Alpuget is the author of seven books, including four novels - Monkeys in the Dark (1980), Turtle Beach (1981), Winter in Jerusalem (1986) and White Eye (1993). These works earned her a number of literary prizes including the PEN Golden Jubilee Award, The Age Book of the Year Award and the South Australian Government's Award for Literature.

d'Alpuget's first book, Mediator: A Biography of Sir Richard Kirby was published in 1977 to critical acclaim. Robert J. Hawke: A Biography (1982) was both a national bestseller and the winner of several awards. She is also the author of On Longing and Hawke: The Prime Minister.

She has served on the boards of the Copyright Agency Ltd and the Australian Film Commission, and was the Chair of the Australian Society of Authors in 1991. She lives in Sydney with her husband and son.