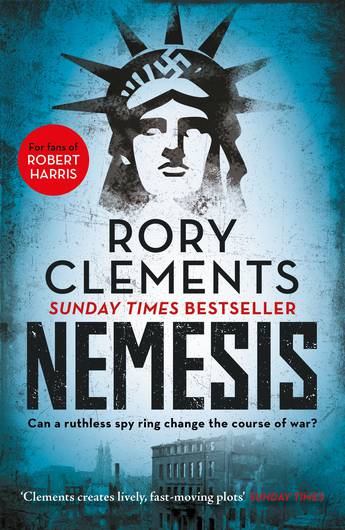 A gripping thriller set at the outbreak of the Second World War by Sunday Times bestseller and author of Corpus and Nucleus, Rory Clements.

Can a ruthless spy ring change the course of war?

In a great English house, a young woman offers herself to one of the most powerful and influential figures in the land - but this is no ordinary seduction. She plans to ensure his death...

On holiday in France, Professor Tom Wilde discovers his brilliant student Marcus Marfield, who disappeared two years earlier to join the International Brigades in Spain, in the Le Vernet concentration camp in the foothills of the Pyrenees. Wilde secures his release just as German tanks roll into Poland.

Meanwhile, a U-boat sinks the liner Athenia in the Atlantic with many casualties, including Americans, onboard. Goebbels claims Churchill put a bomb in the ship to blame Germany and to lure America into the war.

As the various strands of an international conspiracy begin to unwind, Tom Wilde will find himself in great personal danger. For just who is Marcus Marfield? And where does his loyalty lie?

For readers of Robert Harris, C J Sansom and William Boyd, this is a thriller that will keep you on the edge of your seat - by Sunday Times bestseller and author of Corpus and Nucleus, Rory Clements.

'A masterpiece of spies, intrigue and political shenanigans' - Sunday Express

Rory Clements is a Sunday Times bestselling author. He won the CWA Ellis Peters Historical Award for his second novel, Revenger, and a TV series of the John Shakespeare novels is currently in development. Rory lives in Norfolk with his family. Find out more at www.roryclements.co.uk.