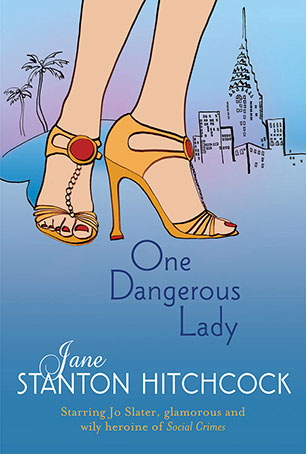 The couture-clad, sharp-eyed and stiletto-tongued socialite Jo Slater is back, in another high society, big money and low manners murder mystery. Rich widows, face-lifted socialites, nights at the opera and evenings in Barbados - it's Jane Stanton Hitchcock at her sly, witty and devilish best.

Following her triumphant return to New York high society in Social Crimes, Jo Slater is now in Barbados flirting with the idea of romance when her old friend Russell Cole disappears from his luxury yacht and is presumed dead. Carla, Russell's latest wife and now a merry widow, is rumoured to be concealing a murky past and Jo suspects foul play.

Back in New York, Jo watches as Carla, armed with Russell's massive fortune, climbs the social ladder with breathtaking speed, disposing of anyone misguided enough to stand in her way. Appalled by both Carla's social climbing and her taste in interior design, Jo decides that she must confront Carla but first she has to uncover the truth surrounding Russell's disappearance.

Another dazzling, page-turning mystery of manners, money and murder.

Riveting . Hitchcock draws upon her intimate knowledge of the upper echelon to expose the dark secrets of a rarefied society.' NEW YORK POST

In addition to her two Jo Slater novels, Social Crimes and One Dangerous Lady, Jane Stanton Hitchcock has written two previous novels, The Witches Hammer and Trick of the Eye, which was nominated for both the Edgar Award and the Hammett Prize as the Best First Novel of the Year. She is also a successful dramatist, and her play Vanilla was directed by Harold Pinter and produced at London's Lyric Theatre. She also writes for The Washington Post and The Spectator.