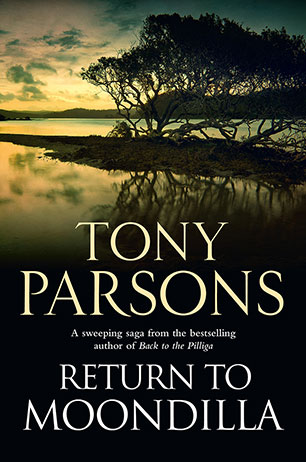 When Greg Baxter returns to his childhood home to finish what he hopes will be a bestselling novel, he didn't count on his plans being waylaid by an investigation into a local drug syndicate, an attempt on his life, and little touch of romance.

Return to Moondilla tells the story of former journalist, Greg Baxter, who's recently returned to the Moondilla area he grew up in to finish writing what he hopes will be a bestselling novel.

Far from being able to concentrate on his novel, though, Baxter is drawn into an investigation into a local drug dealing ring that puts his life in danger. He's also the subject of attention of numerous single women in Moondilla, including the local doctor he once had a crush on, Julie Rankin.

After an attempt on his life, Baxter is hugely relieved when the drug ring is broken open. Finally able to finish his novel, he's elated by its success and also finds himself in love.

With Return to Moondilla, popular Australian author, Tony Parsons, has written another action-packed novel combining a rural setting with a crime subplot and some romance.

Tony Parsons, OAM, is a bestselling writer of rural Australian novels. He is the author The Call of the High Country, Return to the High Country, Valley of the White Gold and Silver in the Sun. Tony has worked as a sheep and wool classer, journalist, news editor, rural commentator, consultant to major agricultural companies and an award-winning breeder of animals and poultry. He also established 'Karrawarra', one of the top kelpie studs in Australia, and was awarded the Order of Australia Medal for his contribution to the propagation of the Australian kelpie. Tony lives with his wife near Toowoomba and maintains a keen interest in kelpie breeding.