Supersaurs 3: Clash of the Tyrants 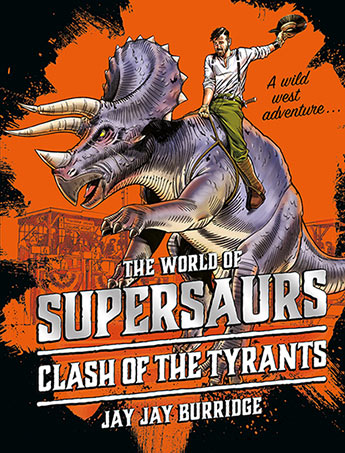 The third book in the thrilling Supersaurs series. The adventure continues in America's Wild West...

Imagine a world where dinosaurs survived...

Bea and Carter Kingsley have been struggling to fit in at school in England after their adventures and the tragic loss of their grandmother, Bunty. Despite his misgivings about further travel, their godfather Theodore decides to take them to America, to visit their Uncle Cash Kingsley's ranch in California. Unexpectedly reunited with Viscount Lambert Von Knutr, and introduced to his wife, Anya Sitz, Bea and Carter find themselves temporarily separated when Bea accompanies the glamorous Viscount's wife to San Francisco. Theodore, still determined to unlock the mysteries of the journals the childrens' father left behind, takes off on a quest of his own. Will the rifts growing be healed - or widen? The adventure concludes in Wild West style with a dramatic showdown at the rodeo...

In a world where dinosaurs have survived and evolved alongside humans, Bea and Carter Kingsley are searching for answers to the disappearance of their parents. But the answers our heroes seek are surrounded in mystery. What is the secret of the Saurmen? And who else is interested in discovering it - can everyone they meet be trusted?

The world of SUPERSAURS is wonderfully realized, grounded in historical events and a classic storytelling adventure beautifully illustrated throughout.
More books by this author More books in this series

Jay Jay Burridge studied Fine Art Sculpture at Central Saint Martin's College of Art and Design. For his degree show he made a forty-foot-long, self-assembled dinosaur skeleton out of MDF.

After graduating, in 1994 he took over from the legendary children's TV presenter Tony Hart writing and co-presenting the TV show SMart for the BBC. This grew into three spin-off series and touring live shows. After eight years with the BBC, Jay Jay then turned his attention to a career in commercial art for brands such as Sony, Adidas, and Levis. It was not long before he started up his own custom-made deluxe trucker cap brand, Lucky Seven Caps.

In the summer of 2010 he returned to his favourite subject of dinosaurs and exhibited his supersaurs sculptures in a one-man show in Beverly Hills, LA. The 80,000 square-foot space was filled with 15 full-sized supersaurs. With his friend Jamie Oliver, he co-created the Dinersaur Diner, situated in the heart of Piccadilly Circus.

Jay Jay lives in Oxfordshire with his family.