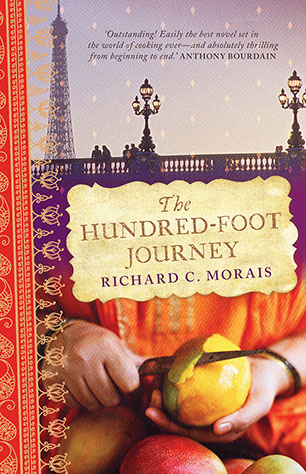 This charming, funny and compulsively readable novel is a delicious tale of restaurant rivalry, the desperate quest for Michelin Stars and the hundred-foot distance between a new Indian kitchen and a traditional French restaurant in Paris.

'I have never experienced that most subtle of senses - smell - captured so well in print. The aroma of fine cooking just floats off the pages. Don't read this book if you're hungry. You might eat it.' - Simon Beaufoy, Oscar-Award-winning screenwriter, Slumdog Millionaire

Abbas Haji is the proud owner of a modest family restaurant in Mumbai. But when tragedy strikes, Abbas propels his boisterous family into a picaresque journey across Europe, finally settling in the remote French village of Lumiere, where he establishes an Indian restaurant - Maison Mumbai.

Much to the horror of their neighbour, a famous chef named Madame Mallory, the Indian establishment opposite her own begins to garner a following. Little does she know that the young Hassan, son of Abbas, has discovered French cuisine and has vowed to become a great French chef. Hassan is a natural whose talents far outweigh Mme Mallory's, but the tough old Frenchwoman will not brook defeat.

This vivid, hilarious and charming novel - about how just a small distance of a hundred feet can represent the gulf between different cultures, different people, their tastes and their destinies - is simply bursting with eccentric characters, delicious flavours and high emotion.
More books by this author

Richard C. Morais, author of The Hundred-Foot Journey, is the editor of Barron's Penta, a quarterly magazine and website providing advice to wealthy families. An American raised in Switzerland, he was stationed in London for eighteen years, where he was Forbes's European bureau chief. He lives in New York.