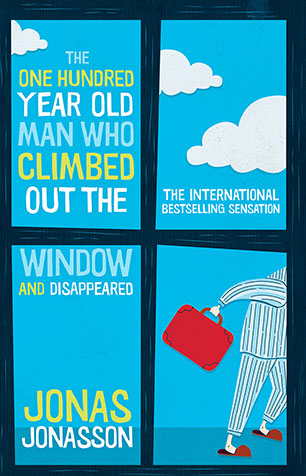 After a long and eventful life Allan Karlsson is moved to a nursing home to await the inevitable. But his health refuses to fail and as his 100th birthday looms a huge party is planned. Allan wants no part of it and decides to climb out the window. Charming and funny; a European publishing phenomenon.

Sitting quietly in his room in an old people's home, Allan Karlsson is waiting for a party he doesn't want to begin. His one-hundredth birthday party to be precise. The Mayor will be there. The press will be there. But, as it turns out, Allan will not . . .

Escaping (in his slippers) through his bedroom window, into the flowerbed, Allan makes his getaway. And so begins his picaresque and unlikely journey involving a suitcase full of cash, a few thugs, a very friendly hot-dog stand operator, a few deaths, an elephant and incompetent police. As his escapades unfold, Allan's earlier life is revealed. A life in which - remarkably - he played a key role behind the scenes in some of the momentous events of the twentieth century.

The One Hundred-Year-Old Man Who Climbed Out the Window and Disappeared is a charming, warm and funny novel, beautifully woven with history and politics.
More books by this author

Jonas Jonasson was born in Sweden in 1962. A former journalist and media consultant, he is now writing his second novel.