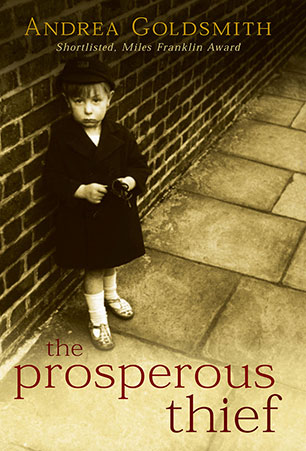 A rich and epic novel of two families spanning the turbulence of the twentieth century over three continents. Alice Lewin, the sole survivor of her family from World War II in Germany, makes a journey across the world to find the thief and his unimaginable theft.

There are thieves who prosper. But are there thefts which can never be forgiven?

The Prosperous Thief covers the turbulent sweep of the twentieth century. Rich in ideas and emotions, it is an epic story of the entwined lives of two vastly different families spanning three continents.

Alice Lewin survived the war as a young child. After decades of burying her past she decides to visit the Kindertransport archive, where she learns of the existence of a possible relative, Henry Lewin. She travels to Australia to hear his story, but it's a story that she's in no way prepared to hear.

The truth has profound ramifications and both Alice's son, Raphe, and Henry's daughter, Laura, struggle to deal with their connected lives. But just as the thefts of the Second World War define their past, so deception threatens their future.

From the horrors of war to the fiery landscape of one of the world's most active volcanoes, this compelling novel generates its own unsettling shadows.

With the sensuous pace of a poet, she unravels an epic tale of two families, spanning the world of pre-war Berlin to late-20th century Melbourne, and counting the cost of the horror from both sides of the moral fence. It is a rare novel; endowed with intelligence and beauty.' Canberra Times, Ian McFarlane

this is a novel that seeks to provoke questions rather than provide answers; a novel about theft and appropriation in myriad disguises as much as it is an attempt to understand the Holocaust's dark shadow.' The Courier-Mail, Bron Sibree
More books by this author