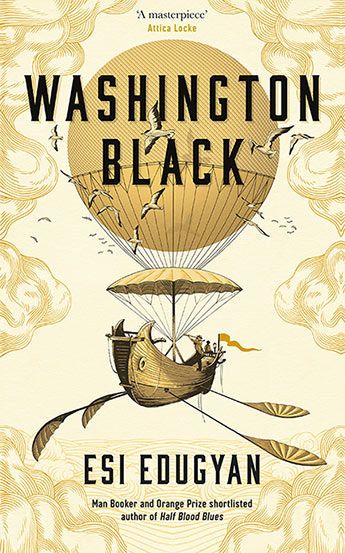 Shortlisted 2018 Man Booker Prize and Winner of the 2018 Giller Prize: A dazzling new novel of slavery and freedom by the author of the Man Booker and Orange Prize shortlisted Half Blood Blues.

‘Washington Black is nothing short of a masterpiece. Esi Edugyan has a rare talent for turning over little known stones of history and giving her reader a new lens on the world, a new way of understanding subject matter we arrogantly think we know everything about. This book is an epic adventure and a heartfelt tale about love and morality and their many contradictions. I loved it.’ - Attica Locke

‘An intimate portrait of slavery at its most genocidal and of the limitations of kindness in an unjust system. The book's hero is a gifted scientist and artist fighting to live a fully human life in a world that insists on seeing him either as livestock or as an object of pity. Along the way, there are balloon rides through storms at sea, vignettes of frontier life in 19th century Canada, scenes of polar exploration, and the establishment of the world's first aquarium. Washington Black is a brilliantly absorbing picaresque; a book that combines the unflinching depiction of violence with a lyrical, hallucinatory beauty.’ - Sandra Newman

When two English brothers take the helm of a Barbados sugar plantation, nervousness and fear run high. Washington Black - an eleven year-old field slave who has known no other life - is aghast to find himself selected as personal servant to one of these men. His new master is the eccentric Christopher Wilde - naturalist, explorer, scientist, inventor and abolitionist - whose single-minded pursuit of the perfect aerial machine mystifies all around him. Through Wilde, Washington is initiated into a world of wonder: a world where the night sea viewed from a hilltop shivers with light; where a simple cloth canopy can propel a man across the sky; where even a boy born in chains may embrace a life of dignity and meaning.

Then, on a disastrous voyage of escape, Wilde disappears. Washington is forced to make his way back to the civilized world alone. One day, however, a man appears in the doorway of his new life, making claims of the past. Is this truly the long-lost Wilde? If so, what are the real motives for his return? And is it possible that his resurrection will destroy everything?

Based on an infamous 19th century criminal case, Washington Black tells the story of a world destroyed and made whole again, where certainty seems unattainable, and men must remain strangers even to themselves.
More books by this author

Esi Edugyan's Half Blood Blues won the Scotiabank Giller Prize, was a finalist for the Man Booker Prize, the Governor-General's Literary Award, the Rogers Writers' Trust Prize, and the Orange Prize. She lives in Victoria, British Columbia.