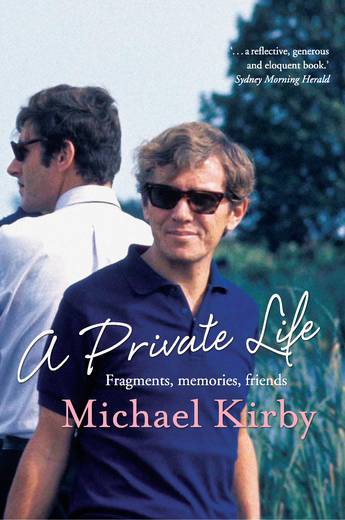 A collection of reminiscences that reveal the private Michael Kirby, opening up as never before in a beautifully written, reflective and generous memoir.

Michael Kirby is one of Australia's most admired public figures. At a time of spin and obfuscation, he speaks out passionately and straightforwardly on the issues that are important to him. Even those who disagree with him have been moved by the courage required of him to come out as a high-profile gay man, which at times has caused him to be subjected to the most outrageous assaults on his character.

This is a collection of reminiscences in which we can discover the private Michael Kirby. It allows the public figure to speak in his own voice, without any intermediary. He opens up as never before about his early life, about being gay, about his forty-three-year relationship with Johan van Vloten, about his religious beliefs and even about his youthful infatuation with James Dean.

Beautifully written, reflective and generous, in that warm and gently self-deprecating voice that is so characteristic of him, this is a memoir that Michael Kirby's many admirers have been waiting for.
More books by this author

When he retired from the High Court of Australia in February 2009, Michael Kirby was Australia's longest serving judge. In addition to his judicial duties, he has served on three university governing bodies, being elected Chancellor of Macquarie University in Sydney (1984-93). He has also served on many national and international bodies, including the World Health Organization's Global Commission on AIDS, the International Commission of Jurists, the UNESCO International Bioethics Committee, the UNAIDS Reference Group on HIV and Human Rights, and the UNDP Global Commission on HIV and the Law. He is a truly great Australian.