Because We Are Bad 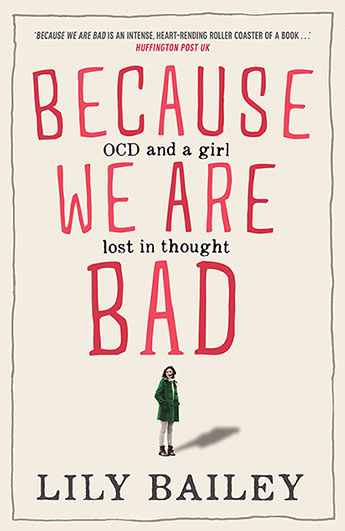 A vivid, darkly funny, moving and uplifting account of a young woman's struggle with OCD.

As a child, Lily Bailey knew she was bad. By the age of 13, she had killed someone with a thought, spread untold disease and ogled the bodies of other children.

Only by performing an exhausting series of secret routines could she correct her wrongdoing. But it was never enough. She had a severe case of Obsessive Compulsive Disorder. From child to teenager to young woman, OCD ruled Lily's life, sending a bright, vital mind spinning into a downward vortex. Until she learnt a fundamental philosophical lesson.

Raw and funny, heart-breaking and uplifting, Because We Are Bad reveals with humour, grace and searing honesty what it's like to live with an almost intolerable burden of obsession.

'Because We Are Bad is an intense heart-rending roller coaster of a book . . . the most engaging and well-written account of mental health experiences I have read.' Huffington Post UK

Lily Bailey is a model and writer. She became a journalist in London in 2012, editing a news site and writing features and fashion articles for local publications including the Richmond Magazine and the Kingston Magazine. As a child and teenager, Lily suffered from severe Obsessive Compulsive Disorder (OCD). She kept her illness private, until the widespread misunderstanding of the disorder spurred her into action. Lily lives in London with her dog, Rocky.