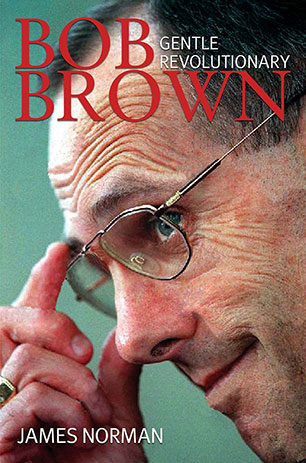 Bob Brown: Gentle Revolutionary is a candid, compelling and very personal account of the man who took the Greens from the political wilderness into the political mainstream and redefined Australian politics along the way. It is a journey that has been anything but easy.

In this first full biography of the person seen by many as the honest face of Australian politics, James Norman goes in search of Bob Brown. His is an intimate exploration of Brown's world to reveal the real man his difficult adolescence, the places he loves, his shy struggles around his sexuality, his search for intimacy and his surprising conversion from conservative country doctor to environmental activist and political revolutionary.

This is a politician who remains resolutely optimistic yet his philosophy is to be defiant, who is gently spoken yet fires equal amounts of passion in his supporters and opponents alike, who in many respects is very conventional but has pursued a radical local, national and international agenda. This is also a politician who has never lost sight of where it all began, in the fight to save Tasmania's wilderness areas.
More books by this author

James Norman is a Melbourne freelance journalist. He is a regular contributor to the Age and Sydney Morning Herald and has written news, opinion and culture stories for many other publications including HQ, Rolling Stone magazine and the Australian.