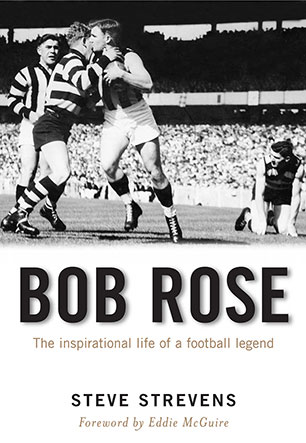 Bob Rose was a hard footballer, a great man, a battler who knew extraordinary personal hardship, but above all he was a man of inspiring courage and dignity. This is the story of his life.

Strevens tells all this [the story of Bob Rose's life] in an unpretentious and utterly dinkum narrative that is exactly suited to the task and the subject.'

the central role of biography is to help us understand others Bob Rose: a dignified life by Steve Strevens achieves this admirably.'

Bob Rose is one of the true legends of Australian Rules Football. Regarded by many as the best rover of all time, he was also coach of his beloved Collingwood for many years. Bob's brilliant ball skills, his toughness as a player, his inspiring leadership and his unerring sense of fair play set him above the pack over and over again.

However Bob's life is about much more than sport. It is also about a remarkable family: his wife Elsie, who gave up a promising singing career, and his sons Robert and Peter one a champion sportsman who became a quadriplegic in the prime of his career, and the other a celebrated poet and writer who took a very different path.

Bob Rose's story is one of humility, grace and great resilience in the face of extraordinary adversity. It is the story of how a man climbed from obscurity, weathering life's lows, both personal and sporting, to become one of the true greats of Australian life. Illuminating, tragic and uplifting, Bob Rose is about one extraordinary ordinary man. It is a story for everyone.
More books by this author

After failing fourth form with ease, Steve Strevens left home two weeks after his sixteenth birthday and joined the navy. He wandered the world for the next ten years before returning to his home in Bob Rose Country' in the Victorian Mallee where he lives with his wife and son. As well as being the author of two books on Australian life, Steve has written for major magazines and newspapers in Australia and overseas on a wide range of subjects not least of them Bob Rose. He is a Collingwood man.