Caught in the Crossfire

An Australian peacekeeper beyond the front-line 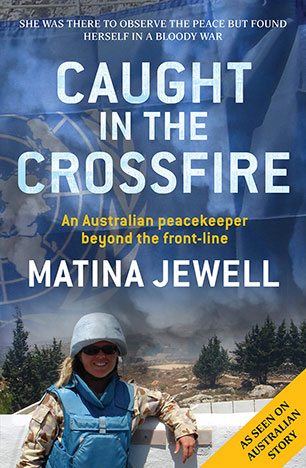 This is a story of idealism and heroism; of romance and terrifying drama.

In 2006, while part of an un-armed UN peacekeeping team at the border junction of Lebanon, Israel and Syria, Australian Major Matina Jewell and her colleagues were caught in a full-scale war with tragic consequences. In the days that followed she and her team-mates reported hundreds of violations of the peace agreement as Israeli artillery, tank fire and aerial bombs, as well as rockets fired by Hezbollah fighters, exploded only metres away and shrapnel rained down around them. But the story does not end there.

Matti Jewell is the kind of soldier every country is proud to have - fearless, honourable and highly skilled. A star graduate from Duntroon by the age of only 24, she became a highly valued army commander. In the years that followed, she earned eight war medals, tracking militia leaders in the Solomons, fast-roping out of Navy helicopters and boarding smuggler ships in the Arabian Gulf, as well as serving on operations with the American Navy SEALS and Australian Special Forces.

Caught in the Crossfire is a frighteningly dramatic first-hand account of what really happens in modern warfare and the high price our soldiers pay for their country.

Matina rose to the rank of Major in the Australian Army She has a Bachelor of Science and a Masters in Project Management. She speaks both Arabic and Bahasa Indonesian, and has represented Australia internationally in volleyball. She is the recipient of six Australian Defence Force service medals and of two war decorations from the Lebanese Government. She is a member of the Federal Commission for the ANZAC Centenary and the Ambassador of the Australian Peacekeeper and Peacemakers Veterans Association. She was born and raised near Byron Bay; today she lives regional Victoria. This is her first book.