D.A.A.S.: Their Part in My Downfall

On the road with the Doug Anthony All-Stars 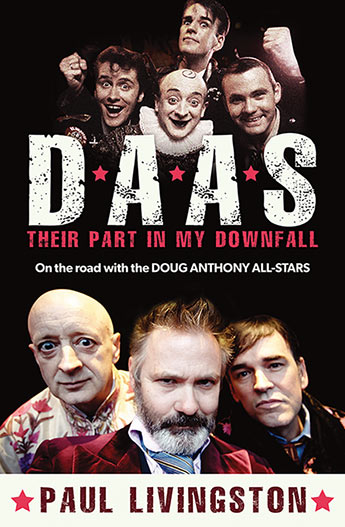 The inside story of The Doug Anthony All Stars then and now. The no-holds-barred true story behind how the bad boys of Australian comedy reunited - weaker, sicker, funnier, older...but not wiser.

'There is ... a ruthless tenderness about the Doug Anthony All Stars that makes them more scathingly funny than ever.' Libbi Gorr

Paul observes, 'You are looking at us, ladies and gentlemen, and thinking, 'Oh my god, Tripod have been in a terrible accident.''

Under the guise of his alter ego Flacco, Paul Livingston once basked in the reflected glory of Tim Ferguson, Paul McDermott and Richard Fidler, and their anarchic comedy incarnation, the Doug Anthony All-Stars. At their peak D.A.A.S. teetered on international greatness, and Paul teetered with them, until that teeter was abruptly toppled in 1994.

Flacco and Paul now find themselves wrenched out of comfortable but obscure retirement to tread the boards again with Tim Ferguson and Paul McDermott - but this time as part of D.A.A.S., playing to sell-out crowds across Australia.

As a fly on the pungent walls of D.A.A.S. dressing-rooms over the decades, Paul Livingston has lived and played alongside these men, probing their depths and shallows. In D.A.A.S.: Their Part in My Downfall he reveals all - their rise, disappearance and rebirth - and interviews their fans, colleagues and famous peers and admirers.

In 2016 the bad old men of Australian comedy dared to venture back to where it all began thirty years ago - the Edinburgh Festival.

Can they recapture the magic? Will anyone remember them?
More books by this author

Paul Livingston (born 1956), popularly known as his alter ego Flacco, is an Australian comedian who has regularly appeared on many television shows, predominantly on ABC TV and Network Ten, including Good News Week, The Sandman and Flacco Special, The Big Gig, DAAS Kapital, The Money or the Gun, The Fat and The Sideshow. He was on Triple J Breakfast from 1994 to 1997, and has also acted on stage and in film. He was joint winner of the Sidney Myer Performing Arts Award in 1996 for outstanding achievement in the performing arts in Australia. He is the author of Absent Without Leave: The Private War of Private Stanley Livingston.

Livingston also wrote the play Emma's Nose about the relationship of Sigmund Freud, Wilhelm Fliess and their patient Emma Eckstein. Livingston has toured Australia and internationally and appeared at festivals in Edinburgh and Montreal. In 2014, he replaced Richard Fidler as the guitarist in the reformed Doug Anthony All-Stars, and toured with Tim Ferguson and Paul McDermott.