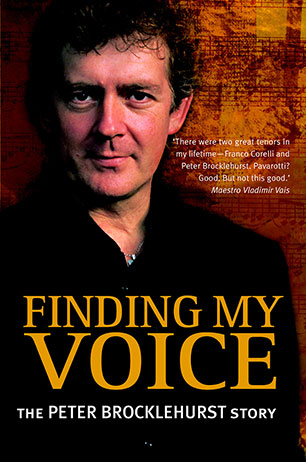 The inspiring and uplifting story of one man's meteoric rise from the cobbler's shop to the concert hall.

This is the inspiring and heart-warming story of one man's rise from the cobbler's shop to the concert hall.

Peter Brocklehurst grew up listening to Mario Lanza records and dreaming of becoming a classical singer. But his world could not have been further from that of the great opera performers. As one of an itinerant family of eight, Peter never attended high school and had his innocence wrenched away when, as young children, he and his sister were abducted and abused for several days before being released.

At twenty-five years old he was scratching out a living in a shoe repair business in Melbourne, abusing the voice he saw as his gift with a 60 cigarette a day habit and fronting rock and roll cover bands.

However all of this was to change when a stranger walked into his store, heard him singing to himself, listened to his story, and resolved to use his contacts to help Peter achieve the dream he'd all but given up on.

Today, with the financial backing of friends and supporters, Peter has been able to close up shop. Instead of fixing broken heels he's receiving singing lessons from a top Russian maestro, studying Italian and attending deportment classes. His debut CD Boots + All has recently revisited the number one position of the Australian Classical Charts. His second CD will be released in September.

Before I got up there, the nerves would be enough to kill an elephant, he says. But I got behind the stage, I felt about two foot taller, my chest out here, I felt like a star .

Peter Brocklehurst is a star, waiting in the wings. This is his story.
More books by this author

Peter Brocklehurst lives in Melbourne and is the latest signing to the Sony Classical label. He already has a number one debut album, Boots + All, to his name and there's another in the pipeline. Peter is a long way from the transient life of fruit picking, shoe repairs and singing in cover bands he'd once resigned himself to.

Chapter 3 Dad told me he has counted seventy-nine moves

Chapter 4 The rest of the family piled into the car

Chapter 5 We had an absolute ball on the road

Chapter 6 You could say Jeanette and I

Chapter 7 Once again I was on the road

Chapter 8 There is a distinct and busy band scene

Chapter 9 I had no trouble getting work with other bands

Chapter 10 Sharon was still working in the chicken shop

Chapter 11 I was a married man with three children

Chapter 12 It was a strange feeling being single

Chapter 14 Those with an eye for a racehorse