From the farm to the frontline 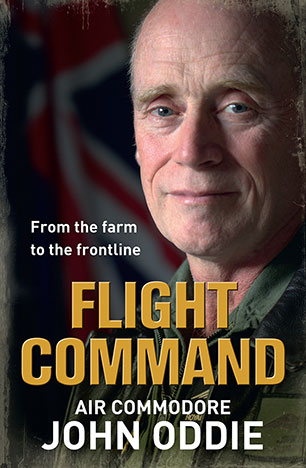 By turns heart-warming and poignant, the story of an Australian farm boy who carved a military career encompassing service in two international wars.

As a farm boy in western Victoria, John Oddie would watch RAAF jets pass overhead as he ploughed hay fields, wondering what it would be like to fly such a machine. Thirty-five years later - having flown Hueys, Chinooks, Hercules, jets and C-17s in a range of operations - John had risen to the rank of Air Commodore.

John's appointment as deputy commander of Aussie forces in the Middle East capped a remarkable career of service to Australia. Sadly, this honour also involved the heartbreaking duty of informing families of the deaths of their husbands and sons in Afghanistan and overseeing departure ceremonies for the fallen soldiers.

As well as covering the war in Afghanistan, Flight Command provides an insider's account of being a combat pilot in the first Gulf War, a commander supporting peace in Bougainville and security in Cambodia and the often harrowing experience of being a first-response commander dealing with the aftermath of the Boxing Day tsunami in Indonesia.

By turns heart-warming and poignant, Flight Command is the story of a farm boy who managed to carve an international career in the military that included service in two wars.
More books by this author

John Oddie grew up on a farm near the small Victorian town Skipton and completed school as a boarder in Ballarat. In his early twenties he decided to join the air force. He spent 35 years in the military, culminating in his role as Deputy Commander of the armed forces in the Middle East. He lives with his wife in rural New South Wales and has an adult son.