Four Seasons with a Grumpy Goat 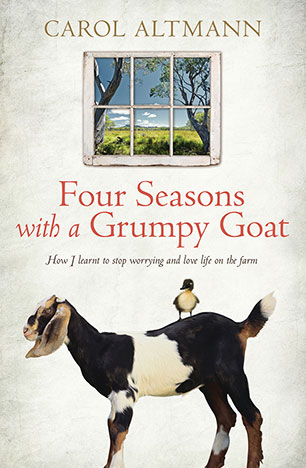 A hobby farm south of Hobart sounds idyllic but author Carol Altmann discovers a tree-change is sometimes not all it is written up to be.

A tree change is about finding a simpler life, right? And that's what Carol Altmann and her partner were seeking when they moved to a hobby farm in Tasmania. But things go wrong in a surprising number of ways as they try to adapt to life on the farm surrounded by an odd assortment of animals-a goat that thinks it's a dog, a bunch of amorous ducks, and a collection of vermin with teeth sharp enough to tear through a wall that are hell-bent on moving into the kitchen.

What looked from afar like an idyllic life turns out to be an education. Add an odd assortment of neighbours and friends and you have an amusing tale about leaving the rat race behind, only to discover more about yourself than you would have found in ten years of city living.
More books by this author

Carol Altmann has been a journalist for fifteen years and has a Master of Journalism degree. She began her career working for Messenger newspapers where she became Chief-of-Staff and was State Political Reporter for the Adelaide Advertiser until 1997. In 2000 she became Adelaide Bureau Chief for The Australian and in 2002 transferred to Tasmania where she was Hobart Bureau Chief. In 2006, she wrote the acclaimed non-fiction After Port Arthur (A+U, 2006). She now is a freelance journalist and a lecturer in journalism at Monash University's Gippsland campus.